the “Pearl of Asia”

hnom Penh (/pəˈnɔːm ˈpɛn/ or /ˈnɒm ˈpɛn/; Khmer: ភ្នំពេញ, Khmer pronunciation: [pʰnum pɨɲ]) is the capital and largest city of Cambodia. Located on the banks of the Tonlé Sap and Mekong River, Phnom Penh has been the national capital since French colonization of Cambodia, and has grown to become the nation’s center of economic and industrial activities, as well as the center of security, politics, cultural heritage, and diplomacy of Cambodia.

Once known as the “Pearl of Asia,” it was considered one of the loveliest French-built cities in Indochina in the 1920s. Phnom Penh, along with Siem Reap and Sihanoukville, are significant global and domestic tourist destinations for Cambodia. Founded in 1434, the city is noted for its beautiful and historical architecture and attractions. There are a number of surviving French colonial buildings scattered along the grand boulevards.

Situated on the banks of the Tonlé Sap, Mekong and Bassac rivers, the Phnom Penh metropolitan area is home to about 2.2 million of Cambodia’s population of over 14.8 million, up from about 1.9 million in 2008.The city is the wealthiest and most populous city in Cambodia and is the country’s political hub. 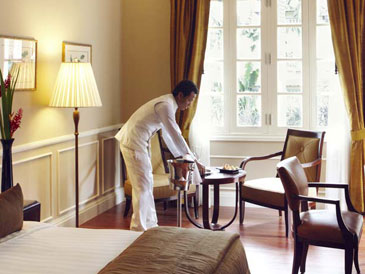 Phnom Penh has a tropical climate. Wet season is from May to October, dry season begins in November and ends in April, average temperatures stay around 30C throughout the year. DRESS CODE: light cotton clothing, comfortable shoes, sandals, hat, sunglasses. When visiting temples it is advisable to dress modestly and wear shirts with sleeves.

In Phnom Penh it is possible to find local handicrafts such as clothing, traditional scarves, sculptures, paintings…

Smoking is forbidden in all temples, public transport, airports (they may have designated smoking areas), train and bus stations, indoor public places including office buildings, hospitals.