oh Samet is a small island in Rayong province, around 200 km Southeast of Bangkok, along the way to Trat province and the island of Koh Chang. Technically part of Khao Laem Ya – Koh Samet National Park, Koh Samet is a popular weekend getaway for Thais and foreigners living in Bangkok, so there are dozens of beach resorts, bars, and restaurants on nearly every beach, although visitors are allowed to camp if they wish to do so.Quiet and relaxing on the weekdays, raucous and fun on the weekends, Koh Samet is, despite its proximity to Bangkok, a beautiful island with powdery white sand, generally great year round weather, and a variety of lodging options.Koh Samet derives its name from the cajeput trees that grow on the island, called “samet” in Thai. In the past however, it was called Koh Kaew Phitsadan, the “Magic Crystal Island”. It’s no surprise from that name that Koh Samet was chosen to be part of a national park. Visitors to Koh Samet looking for unspoiled beauty have to get away from the more developed beaches along the east coast, though even the most popular beaches are quite beautiful. Those looking for more relaxation can book rooms at the more upscale resorts on the west coast, which are spectacular places to watch sunsets.

Koh Samet is a small island around 200km south-east of Bangkok and just over 5 km off the coast of Rayong province. The island is part of the Khao Laem Ya – Koh Samet National Park though all of Koh Samet’s beaches have been developed to cater to the large stream of Bangkok residents who flock to the island each weekend. Drawn by its 14 fine, white sand beaches that feature a number of beachside bars and restaurants, Thai and foreign visitors return again and again to Koh Samet to enjoy the excellent weather on the island and appreciate its great natural beauty, home to exotic wildlife species including monkeys, hornbills, gibbons, and butterflies. (credit: tourismthailand.org) 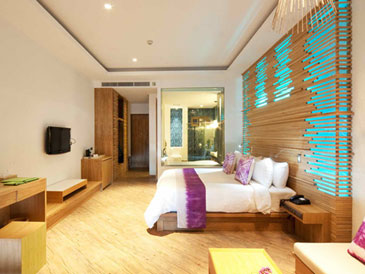 Koh Samet has a tropical climate influenced by monsoons but gets less rainfall than many other islands. Rainy season is from May to July. Average temperatures stay between 25C and 30C throughout the year. DRESS CODE: casual and beach attire, light cotton clothing, comfortable shoes, sandals: hat, sunglasses and a good sunscreen are essentials. When visiting temples it is advisable to dress modestly and wear shirts with sleeves. Some classy venues such as restaurants require a smart casual attire.

Koh Samet has a limited variety of shopping: local markets and shops and shops in the hotels.