hiang Rai has been inhabited since the 7th century, but it was not until 1262 that King Meng Rai established it as the first capital of the Lanna Kingdom. The capital was later relocated to Chiang Mai and since that time Chiang Rai has lived in the shadow of its neighboring province, though for tourists this is a good thing.Today, Chiang Rai is a traveler’s paradise, endowed with abundant natural attractions and antiquities. Attractions range from ruins of ancient settlements and Buddhist shrines to magnificent mountain scenery and hill tribe villages. For those interested in the natural side of Chiang Rai, jungle trekking is a magical experience; explore the mountains of the north along various hiking trails, many of which access the villages of diverse hill tribes groups, many of whom maintain their traditional lifestyles. Chiang Rai town, which tends to be a little more ‘laid back’ than its more popular neighbor, now competes with Chiang Mai as a tourist attraction and is fast becoming a popular escape for tourists wanting to leave their troubles behind. (Credit: Tourismthailand) 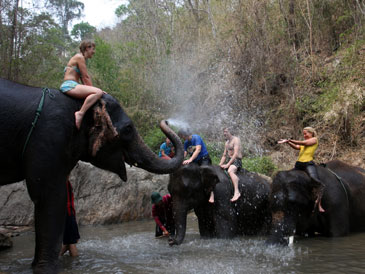 Chiang Rai has a tropical climate influenced by monsoons . Rainy season is from May to October. Average temperatures stay around 30C throughout the year. DRESS CODE: light cotton clothing, comfortable shoes, sandals, hat, sunglasses. When visiting temples it is advisable to dress modestly and wear shirts with sleeves. Some classy venues such as restaurants require a smart casual attire.

Chiang Rai has a good variety of shopping: local markets, shops and some shopping malls. Most shopping malls open at 10 am to 10 pm.